I may or may not like to torment Jacques (don’t judge me!). I would link you to a few examples, but really, all you have to do is read just about any post to see that. This particular time Jacques and I had been home alone all day and, in my defense, we were both bored. So, I had a brilliant idea that started like this… 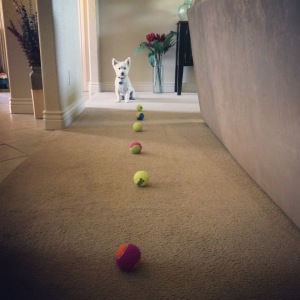 And ended in Jacques almost having a meltdown. Luckily, I just happened to have my phone handy to capture it…

This is the abbreviated video of what happened. He went on like this – squeaking, unintentionally kicking, and subsequently chasing the tennis balls for another 10 minutes while I sat and cackled like a mad woman. He finally wore himself out and I had laughed so hard my side hurt. It was a good way to kill 15 minutes, Really it was a win-win. 🙂

“Mommy and Daddy went to Paris and to London and all I got was this lousy… bit of NOTHING!!! They didn’t bring me home ANYTHING!! Mommy bragged about her Rosetta Stone socks and her ‘Princess’ mug (she thinks that because she is related to Charlemagne she is a princess – HA!). Then she gloated about the miniature Shaun the Sheep she bought at Harrods. She showed no remorse for not bringing me anything. I am offended. Let there be much shame upon her. I do not like it, no! This is what I think of her Shaun…

And I would have destroyed the vile creature had she not stopped me.

After being caught accosting Shaun, Mommy told me to calm down. She tried to reason with me and soothe me. She knew I was offended by not receiving a souvenir. She swore they looked for a Musketeer hat and a Beefeater hat (whatever those are!) for me. At first I said, ‘NO! I do not like it!’ I eventually forgave her because I kind of like her and because she is a great snuggler. But I can never calm down… who is she kidding?” 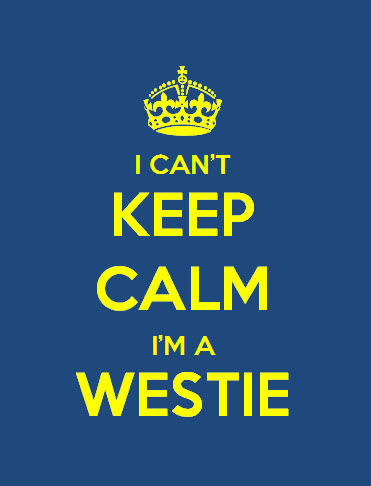 (Or… Rocky Gets A Dose of His Own Medicine)

(Or… If Looks Could Kill)

In late 2008, Rocky was having a hard time with one of his paws. He had a lick granuloma that started between his toes and wound up involving his whole paw. (For those not in the know – a lick granuloma is often referred to as a hot spot. It is an irritated area that an animal relentlessly licks causing further irritation/infection and results in a downward spiral from there.) He was visibly uncomfortable and panted a lot. He would even growl at me when I got too close to his paw. One of the main things with a lick granuloma is to break the animal’s cycle of licking the irritated spot, so I tried putting a doggie bootie on him. After realizing that I was going to have to tape the stupid bootie on him to get it to stay put (those things are worthless!), I decided that having a wet paw in an enclosed, not well ventilated bag was probably not the best idea ever, so I pulled out the trusty standby otherwise known as “the cone of shame.”

Now, I don’t want to say that Rocky had this coming, but he did make it difficult for Niko when Niko had to wear the cone. Maybe seeing what it was like on the other side of the cone wouldn’t be so bad for him. Apparently it was. After putting the cone on Rocky, he freaked out and was not happy. He refused to move and would only shoot daggers at me with his eyes. On the upside, once I took the cone off him (which was almost immediately after seeing his reaction to it), Rocky was VERY nice to me and didn’t growl anymore when I doctored his foot.

A few weeks ago Jacques had had enough of the severe weather in our area and let Mother Nature know exactly what he thought!!

Mother Nature was obviously not impressed because the rain and severe weather continued for another two weeks after Jacques’ tirade.

P.S. In all honesty, Jacques barks like an idiot at ALL thunderstorms (and clouds and squirrels and bunnies and blowing leaves…).

Working at my desk one morning, I caught movement from the corner of my eye… something large and green. Ah – Jacques had brought Mr. Frog into the office with us. Great. The more, the merrier, right? I turned my attention back to the computer. Before long I heard “harumph”-ing, growling, and movement. Lots of movement. When I turned around, I was surprised to see that I had a front row seat for a rasslin’ match.

It looked like Mr. Frog had the upper hand… leg? flipper? 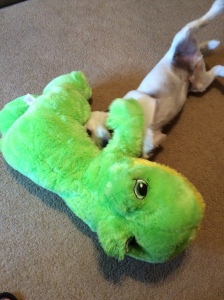 But Jacques came back and bit him right on the eye!

Then Jacques went for the jugular…

At that moment, I had to look away. I didn’t want to see the fluffy carnage that I would have to tend to – it was too much! I was sure that Jacques was going to finish Mr. Frog off once and for all.

Apparently I was wrong.