Or… A Day in the Life of Jacques.

Many thanks to my husband for all his help!

Every WWE superstar has a signature move. The Rock has “the People’s Elbow” and… okay, that’s the only wrestler and/or move I know, but you get my point. Wrestlers have a move they breakout at a pivotal point in a match. Well, Rocky and Jacques have their moves too.

When the boys started Doggie Rasslin’, they spent some time feeling each other out, seeing what the other was capable of. Jacques very quickly learned that if he ran and stood underneath Rocky, a)1) Rocky couldn’t reach him, b)2) Rocky couldn’t move, and c)3) Rocky would very likely fall down. And so the “Duck and Cover” was born. 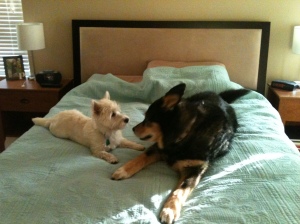 While this maneuver was effective, it only bought Jacques a few seconds of escape time. Rocky (even in his old age) was able to get up fairly quickly and resume the match. But Jacques used that escape time well and adopted the “duck and cover” as his signature move.

One day during the course of a rasslin’ match – I’m not sure if it was by accident or if Rocky really knew what he was doing – Rocky somehow flipped Jacques on his back. Jacques laid there with his feet sticking straight up in the air and flailed, squirmed, and groaned but couldn’t immediately right himself. He looked like a turtle that had been flipped upside down! “The Turtle” was an extremely efficient way to immobilize Jacques and became Rocky’s signature move.

If there had been a ruff, er, ref present during that match, Rocky would’ve won paws down. After seeing its effectiveness and the great annoyance it brought Jacques, my husband and I decided that when rasslin’ with Jacques we would make “the turtle” our signature move as well. So any time any of us rassles with Jacques, there’s at least one moment where Jacques is turtled – his feet and tail flailing, teeth gnashing, and grumbling. Lots of grumbling.

This video captured  the first time Jacques was turtled (at least that I know of). He apparently didn’t appreciate it because he ran under the bed after it happened. Enjoy!