A number of years ago (like 7 or 8), I helped with a garage sale that benefited some local animal rescues. As we were loading up the unsold items to take to Goodwill, I noticed a very large stuffed duck. I thought it was hilarious and brought it home for Niko who had a thing for stuffed animals.

Niko was VERY excited to receive this new, giant baby. He quickly grabbed the duck and headed for the back door. He tried to push it out the partially open sliding glass door but instead fell over it and out the door. He didn’t let that deter him… He grabbed the duck from the outside and tugged with all his might over and over before it finally popped loose and sent him somersaulting backwards. He then proceeded to trot back and forth across the yard with the duck in a victory parade of sorts before he settled down to gnaw on the toy.

About a year later Niko was diagnosed with adenocarcinoma, a very aggressive form of cancer. After surgery to remove the tumor, he underwent chemotherapy. One of my co-workers (who was an ovarian cancer survivor) told me about her chemotherapy experience, so I knew that it was going to be a rough road for him. One week, he was having a really hard time. My boy, who was normally so full of life, was a shadow of his former self. He seemed so down and depressed. I remembered how happy he was when he saw that giant duck, so I set out to find him another one. Luckily for me it was right around Easter and the local pet store was overflowing with giant sheep, ducks, and bunnies. I grabbed a duck for Niko and a sheep for Rocky and rushed home. Though I could tell he still felt awful, it was so wonderful to see the flicker of happiness in his eyes when he saw me with that duck. He grabbed it and dragged it into the back yard where he proceeded to slobber all over it. When he could, he would drag the duck through the house with him and would often sleep with it. When he couldn’t move it, I would bring it to him and watch him almost sigh with relief. He finished his chemo soon thereafter and was cancer-free for another almost two years. He loved that duck so much that I had to sew the silly thing up THREE times and wash it countless times (he LOVED to drag it though the backyard).

Niko with his duck a month before crossing the Rainbow Bridge in 2010.

Though Niko is no longer with me, I still have the giant duck. He sits atop the bookcase in my office and looks down on me while I work. I look at the duck and think of the silliness that was Niko and how much I will always love him. 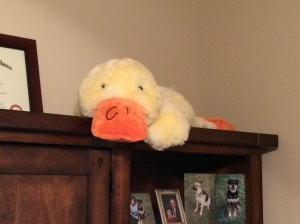 (For the record, Rocky’s sheep lasted about 30 seconds before he had the head ripped off and stuffing strewn across the backyard.)

A few weeks ago, I saw a bin of giant ducks, sheep, frogs, and cows. I couldn’t help but think of how much Niko would have loved those. I started to get one for Jacques but couldn’t bring myself to do it. I wasn’t ready. About a week ago I saw the bin again and knew what needed to be done. I picked out the biggest, plushest frog I could find and brought it home. Jacques was overjoyed and though the frog was bigger than him, he didn’t let it stop him from dragging it around the house, cuddling with it, and even sleeping on it. It made me happy. In fact, I laughed hysterically for a long time. It was a reminder that loves comes in all shapes and sizes – we just need to keep an open heart. 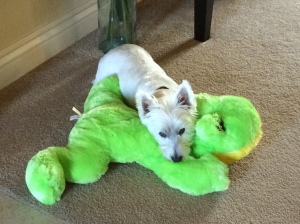 Jacques may not be big in size like my other boys, but his heart is every bit as big. And his ego… Well, his ego is much, MUCH bigger.