this little piggy wanted to go to the market 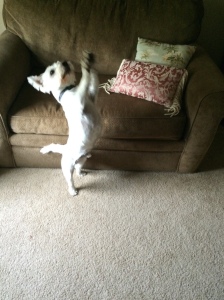 but instead he had to stay home

but indeed he got none

so he cried “boo hoo hoo” until daddy came home 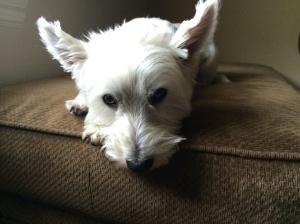 that’s when this little piggy got a pleasant surprise

and his little piggy mind would be blown

“A short stack for Short Round!” yelled his kind daddy

and indeed the piggy had some 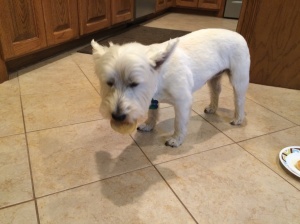 My husband and I spent a long weekend in Nashville not too long ago. While we were there, we did something called “The Escape Game.” The basic premise is that you are locked in a themed room with a few other people and have to work together to find clues and solve puzzles to get the code that will allow you to “escape” the room. Oh, and you only have 60 minutes to do it. On average, less than 40% of the people who play actually escape. We were some of the lucky ones – we escaped. We shouted for joy and jumped up and down with the 4 women we were paired with as the door opened. It was an absolute blast! Later that day as my husband and I were rehashing our victory, I found myself thinking about Jacques’ escape games – except they weren’t games and it definitely didn’t take him 60 minutes to get out.

When we adopted Jacques, my husband, Rocky, Jacques, and I were all out in the backyard one afternoon when Jacques spotted a cat and decided he needed to go after it. He was able to get his nose underneath one of our large gates. I watched but wasn’t terribly concerned because I didn’t think he could fit his pork chop little body through that tiny space. That’s what I got for thinking. As I stood there, I watched Jacques push with all his might until he popped through the small space at the bottom of the gate. I. Was. Dumbfounded. By the time we were able to get the large gate open and get to the front of the house, Jacques was nowhere to be seen. I was frantic. My husband (always one to come to my rescue) started running. About 10 minutes later he came back carrying a very dirty and grumbling Jacques. My relief was short lived as Jacques pulled this escape act once more before treating us to his grand finale (which wasn’t his fault). 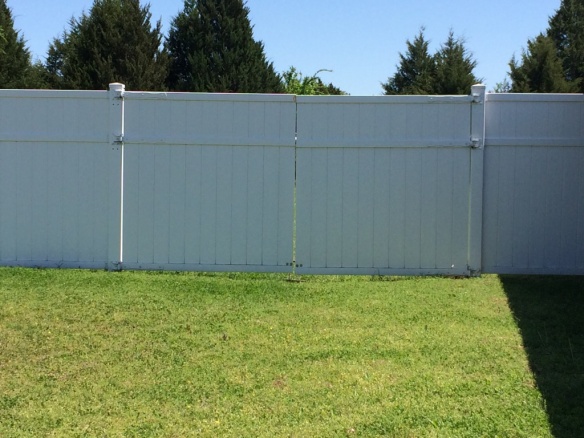 The large gate Jacques managed to squeeze under.

A short time after Jacques’ first two escape attempts, my in-laws had come down to help us level out our back yard and to fill the hole under the gate. We worked all day dumping and spreading dirt and were quite pleased with the results. That evening as everyone was enjoying being clean and full, I realized something was wrong. We had let Rocky and Jacques out a little earlier… and Rocky wasn’t at the back door demanding to be let in. I immediately knew something was wrong. I went outside to check on them and found that the large gate was completely open. Rocky and Jacques weren’t in the back yard or around the front of the house. I was so scared. Rocky was old and Jacques was crazy – I had no idea where they would be. With my heart in my throat and panic coursing through my veins, I got my husband’s attention to let him know that the boys were gone. I had no idea which way to go – it was dark, we live on the outskirts of town, there’s a large wooded area behind us where a pack of coyotes live, Rocky was old and couldn’t see well… Did I mention I was frantic??

I took off running. It turned out that I only had to go one house over. Next door, Rocky was “watering” our neighbor’s plants. And Jacques was “watering” Rocky’s leg. I almost passed out from relief. I squatted down, held open my arms, and called out to Rocky. He turned around and gave me a Rocky smile before ambling over to me. Jacques followed suit.  About that time, my husband and in-laws found us. (If my in-laws didn’t already think I was crazy, my actions that night pretty much sealed the deal.) We made sure the gate was closed and locked before retiring for the night. I hugged my boys extra tight that night and thanked my lucky stars that they were home with me. Now after doing any yard work, I check the gates to make sure they are shut and locked before I let Jacques out and I check on him often. Unless I forget he’s outside.

Rocky in his younger years escaping to the pond…

I don’t have pictures from the night that Rocky and Jacques got out, so I thought I’d share some fun pictures of Rocky during a supervised escape to the pond at my in-laws’ house.

Jacques still pokes his nose out under the large gate, but he seems content with letting that be as far as he ever goes. Thank goodness. I can’t handle any more of his escape games! 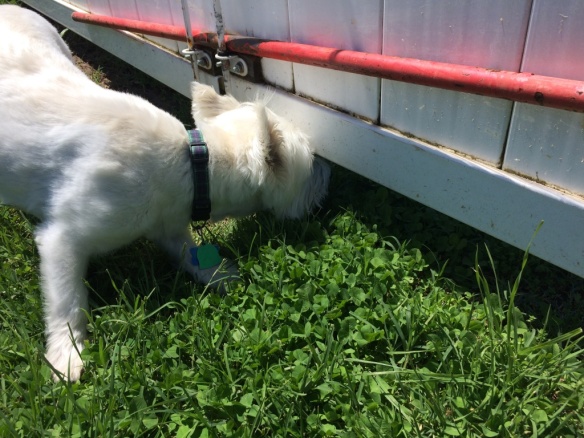 Jacques likes to peek under the fence to see what the cats next door are doing.

“It is warm. It is sunny. It is closer to the weekend. I will partake in the day – but only by lounging in the sun.”

“It is cold. It is raining. It is Monday. I refuse to participate in the day. NO!” 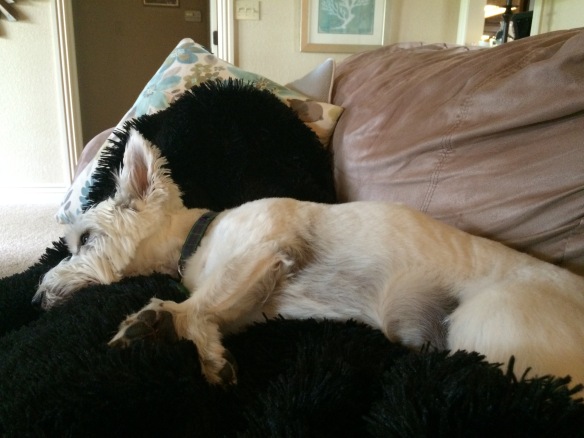 I can’t say that I disagree, my disgruntled little buddy.

In April 2010, Niko, Rocky, and I were at my then boyfriend’s house (now husband) for a family gathering. There was a ton of great food being eaten by a bunch of festive people. I noticed that Rocky had dropped off the radar and set out to find him. Once I found him, I had to figure out what in the heck he was doing – which didn’t take long. I think this series of photos says it all. I laughed so hard when I saw what he was doing. To this day, I still laugh out loud when I see the pictures. They are just so Rocky. 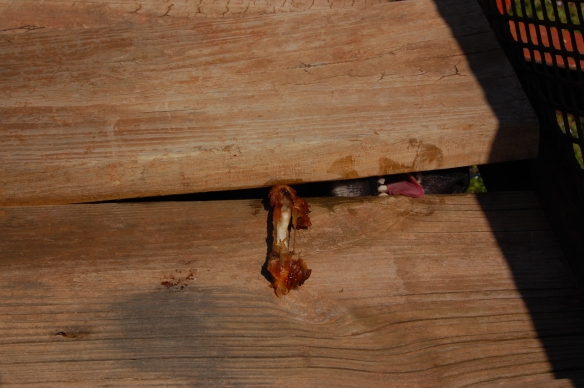 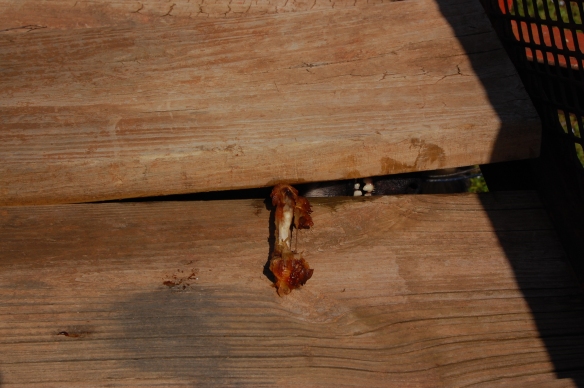