A number of years ago, I was hanging out with a group of new friends. We had been talking for quite some time and, of course, I talked quite a bit about my dogs. Towards the end of the conversation, I mentioned that I had to go out of town for a business trip and was trying to decide what to do with “my boys” while I was gone. One of the guys in the group, John, spoke up and said he’d gladly dog sit for me. We arranged a time at a later date for him to meet the boys and make sure everyone would be comfortable with each other.

When John came over, I let him in and watched as Niko and Rocky swarmed around him – jumping, barking, and sniffing. John had a puzzled look on his face… The conversation went something like this:

It was my turn to be puzzled but then I realized… I called Niko and Rocky so many different names and had probably done so during the course of my conversations with John and other friends. Anyone who didn’t know my boys could easily be confuzzled. Heck, people who did know them were confused!

Though Niko and Rocky are gone, I still often refer to them by one of their many names. I have unintentionally carried on the tradition with Jacques. My husband has even given him a few nicknames – though I will not be repeating them. 🙂 Jacques is still relatively new to the family, so I’m sure his list of names will continue to grow. 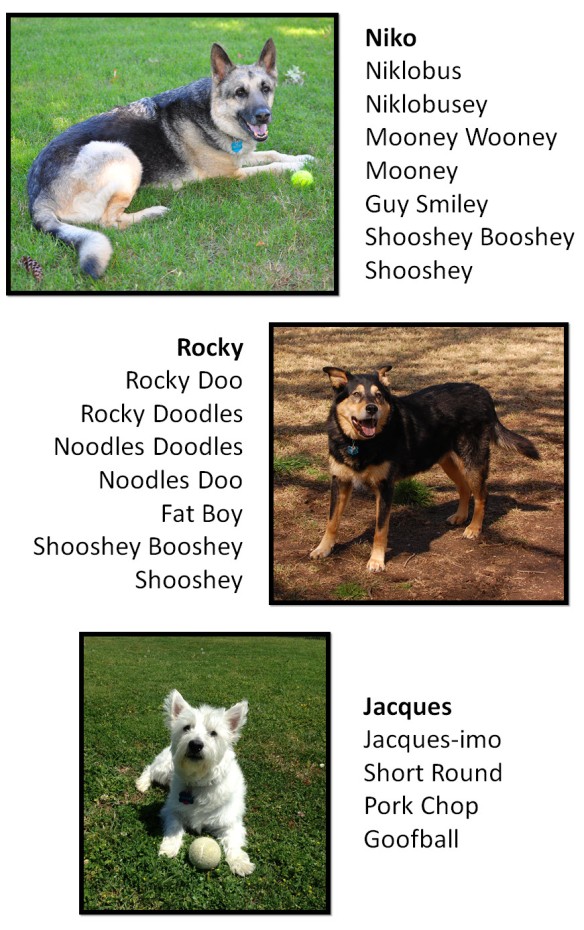 A few of our new blog friends – Noodle and Kona – have similar stories. I’m glad to know I’m not the only one who does this… 🙂

14 thoughts on “Furry Flashback – How Many Dogs Do You Have??”