(Or… This Has Gotten Completely Out of Control)

“I make a beautiful spinster in an idyllic English country village, no?”

Jacques is a little bummed out because his bracket was “smashed all to heck” (his words, not mine). Thanks a lot, Kansas. And Nova. And Iowa State. 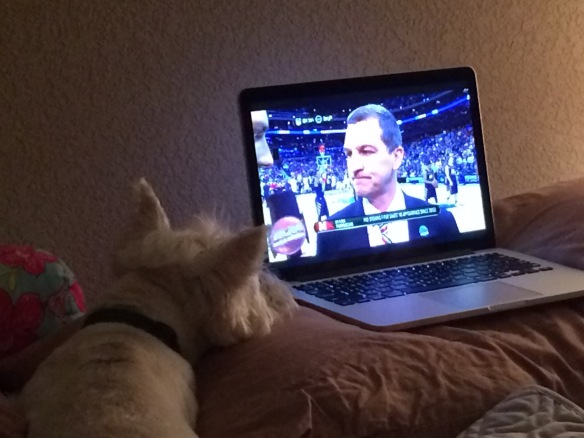 I think we’ve already established that Jacques, while being incredibly sweet and wonderful, isn’t the sharpest tool in the shed. He’s a few fries short of a happy meal, a few cards short of a deck, not the brightest bulb in the string… and so on. I was going to link to a previous post to prove my point but, really, you could read any of them and get what I’m saying. He’s more “special” than Rocky – and let me tell you, it takes A WHOLE LOTTA special to be more special than Rocky.

It took Jacques a while to figure out what was a toy and what wasn’t – and it wasn’t for lack of toys. My house often looks like a kindergarten playroom with balls and de-stuffed toys (which we call “babies”) strewn all over the place. After a few failed attempts, Jacques finally got the hang of the toy and toy box concept. I have tried to get him to understand the difference between “bring me the ball” and “bring me the baby.” When given one of those commands, he will do one of three things: pick up the toy closest to him, get Lamb Chop (because that is his favorite thing in the whole wide world), or stand and stare blankly at whoever gave the command. He usually does the latter. (Even Rocky – ROCKY – knew the difference between “ball” and “baby’!!) But what my little guy lacks in gray cells, he makes up for in gusto and cuteness. And I remind him often that it’s a good thing he’s cute.

And if you’re wondering… Yes, yes that is a bathmat. He dragged it all the way from the bathroom, down the hall, and into the office. I heard him grunting and heard something dragging but I was busy working. My curiosity (and doggie mom instinct) eventually got the best of me… I turned around and saw him sitting there with the bathmat. I was confused, then shocked, and then fell into a fit of hysterical laughter. It’s a similar story with the throw pillow. He dragged it from a chair across the house and into the office…

A number of years ago, I was hanging out with a group of new friends. We had been talking for quite some time and, of course, I talked quite a bit about my dogs. Towards the end of the conversation, I mentioned that I had to go out of town for a business trip and was trying to decide what to do with “my boys” while I was gone. One of the guys in the group, John, spoke up and said he’d gladly dog sit for me. We arranged a time at a later date for him to meet the boys and make sure everyone would be comfortable with each other.

When John came over, I let him in and watched as Niko and Rocky swarmed around him – jumping, barking, and sniffing. John had a puzzled look on his face… The conversation went something like this:

It was my turn to be puzzled but then I realized… I called Niko and Rocky so many different names and had probably done so during the course of my conversations with John and other friends. Anyone who didn’t know my boys could easily be confuzzled. Heck, people who did know them were confused!

Though Niko and Rocky are gone, I still often refer to them by one of their many names. I have unintentionally carried on the tradition with Jacques. My husband has even given him a few nicknames – though I will not be repeating them. 🙂 Jacques is still relatively new to the family, so I’m sure his list of names will continue to grow.

A few of our new blog friends – Noodle and Kona – have similar stories. I’m glad to know I’m not the only one who does this… 🙂

(Or… I Have A Narcoleptic Dog)

Jacques is very patient and will wait you out while you taunt him with, er…,  I mean, show him a treat/stuffed toy/tennis ball/whatever. He is also very focused – until he’s not. Westie families know what I’m talking about! But I digress…

Jacques is also very patient when it comes to getting his way – namely with sitting in my lap. Usually he just throws himself into my lap as soon as I sit down, but if I act quickly, I can stop him in his tracks with a firm “no.” Once I say no, the standoff begins. (That’s a whole other post!) During one standoff, my husband and I worked to suppress snorts and giggles as we watched Jacques’ laser focus turn into a narcoleptic event over the course of about three minutes. Luckily, I just happened to have my phone nearby…