Jacques never ceases to amaze me. Sometimes it’s his cuteness. Sometimes it’s his tenacity. Most of the time it’s his insanity. But one day last February when Rocky was still with us… He really came through for me. And for Rocky. I think about that day and even now am still amazed.

I was in the kitchen & noticed Jacques at the back door. I made eye contact with him and watched him turn around and run, but before he got out of eyesight, he turned and looked at me, looked off to the side, then ran off again. It made me think that something was wrong – especially because Rocky was nowhere to be seen. I ran out the back door and found Rocky splayed out on the icy snow. One leg was twisted and turned backwards – I thought it might have been broken. He was struggling to get up and crying. I ran over to him and was somehow able to get his legs under him so that he could stand up. The whole time I worked on Rocky, Jacques was running laps around us and barking as if he was telling Rocky, “Come on! You can do it!”

Rocky’s foot was bloody from a cut caused by the icy snow, but he was able to limp towards the back door. Most of the way there he couldn’t put weight on his back foot, but by the time we made it inside he was able to walk. Thankfully he wound up being okay, just a little shaken up. Jacques followed us the whole time, barking his encouragement. (Okay, I don’t speak dog, so I have no idea what he was “saying,” but this is my story and I say he was barking encouragement, so that’s what we’re going with.) Had Rocky been out there much longer, he might not have been able to walk back to the house on his own. I’m not sure what I would have done, but I’m thankful I didn’t have to think about that.

I was so proud of Jacques and so pleased (and surprised to be honest) that he was able to alert me that something was wrong. He got lots of extra treats, hugs, and kisses that night.

And that was the time Jacques saved the day. 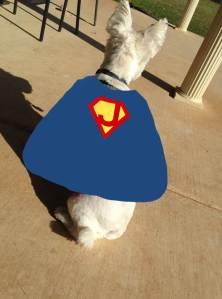