he gave me such fright.

he kept me up all night!

I couldn’t find him at all…

he’s hidden inside the wall!

I hope he takes flight

because I need my beauty sleep tonight. 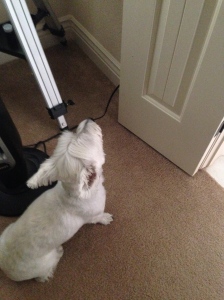 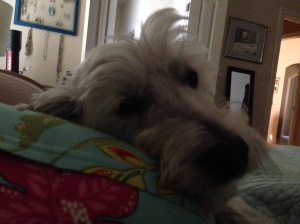 Since Rocky passed, we are no longer greeted at the door with barks, howls, or yips. In fact, we’re rarely greeted at the door at all. Until Rocky lost his hearing, he *always* greeted us at the door with his booming bark and lumbering frame. I think Jacques just went a long for the ride because he didn’t want to be shown up. We had to navigate our way into the house through the obstacle course that was a giant dog (who had no ‘reverse’) and a small yipping, jumping dog that we were afraid of stepping on. Now… Now, Jacques is just lazy. Or doesn’t care. Or both.

I remember the first time I came home alone after Rocky was gone. It was so quiet as I entered the house. For a brief moment, I panicked thinking something had happened to Jacques. I moved quickly into the house, scanning for a white, fluffy dog as I went… and walked in to find this. 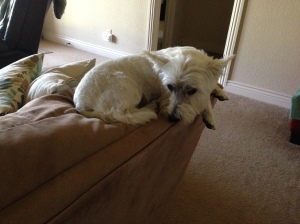 Yeah. He was fine. Nothing had happened to him. He was sleeping on the job and just couldn’t be bothered. He eventually sat up, stretched, and gave me a “What do you want?” look before remembering I was the one with opposable thumbs who could open the back door. Then he became a ball of furry excitement. I rolled my eyes, let him outside, and didn’t think much of the episode. Until… It happened again. And again. And again.

I no longer panic when I come home and am not met at the door. Instead, I head straight to the living room and find him perched on “his spot” on the back of the couch. I find him there about 80% of the time. I guess he a)1) really likes his afternoon siestas and b)2) feels that watchdog and/or welcoming committee duty is beneath him. Silly me. What was I thinking? Expecting a dog to bark when someone entered the house? That’s just crazy.

Because Rocky was a rescue, I never really knew when his birthday was – though through the loss of his baby teeth and some complex math (carry the 2, divide by Pi), I was able to determine he was born sometime in the month of October. Not long after that, the month long celebration known as Rocky-tober was born.

Rocky’s rescue was traumatic (you can read an abbreviated version of the story that was featured on the ASPCA’s Success Stories webpage in 2007 here). I actually saw him get hit by a large truck – twice. As he got older, he seemed pretty goofy and I sometimes wondered if his head struck the pavement when he was hit. His “specialness” became a running joke with my friends and family. (For the record, I believe that he was just a big, goofy oaf who had no idea how huge he was.)

After I rescued Rocky, there was a span of about 7 years where I seemed to constantly come across lost and wounded animals (specifically birds, turtles, cats, and dogs). A lot of them were “special” too. I was jokingly dubbed a “patron saint of lost, wounded, and ‘special’ animals” by my friends. (Some would even argue that I seemed to attract lost, wounded, and “special” boyfriends… but I digress.)

Rocky-tober eventually became not only a month to celebrate my wonderful, goofball Rocky – who was once lost and wounded – but one to remember those animals who are or were lost and wounded… and to love them in all their “specialness.”

This is our first Rocky-tober without Rocky. This year “remembering the lost” has a little different meaning for us, but we will remember all of the love, silliness, and “specialness” that was Rocky. And we will certainly enjoy the “specialness” that is Jacques!

So, Happy Rocky-tober!!! Be kind to the special furry loved ones in your life, and remember to be kind to the lost, wounded or “special” furry souls you encounter. You may just find yourself asking, “Who rescued who?”