Jacques has had Rocky’s company for the three years that he has been with us. Now that Rocky is gone, Jacques is home alone for a few hours a day and occasionally for a little while on the weekend when my husband and I venture out without him. I have noticed that some of his behaviors have changed.

Jacques doesn’t bark when I come home. He and Rocky used to have a bark-fest that would inevitably end with Jacques howling/yodeling and me laughing hysterically. (One of my regrets is not getting a recording of that. It always made me so happy.) He only occasionally greets me at the door now. Most of the time he doesn’t get up off his perch on the back of the couch. While he doesn’t seem depressed, he does seem a little pouty about being home alone.

One Saturday afternoon, he seemed particularly pouty after my husband and I were gone for a good portion of the day. I decided that I needed to look into some sort of entertainment for him while we’re gone.

A quick Google search yielded numerous ideas and suggestions. (Did you know that there’s a TV channel for dogs?? DogTV. Hilarious!) One of the suggestions was a DVD made for dogs that are home alone. I thought, “Hey! This could be good.” I started playing video clips from a “dog sitter” website which immediately got Jacques’ attention. His squeaks, howls, and generally confused looks were priceless. We thought it was all fun and games… until the video ended. Jacques started circling the laptop, staring at it anxiously. He even jumped up and put his paws on it. I closed the laptop, told him to leave it, and attempted to distract him buy squeaking one of his toys. He wouldn’t move. He wouldn’t stop staring at the laptop. My husband and I started playing catch with a squeaky ball (something he can’t resist)… The only movement Jacques made was to circle the laptop while grumbling. He was in full blown “gotta find the source of that sound neurotic mode” and there was no breaking that spell. Huh. Okay. So, maybe this wasn’t such a good idea after all. 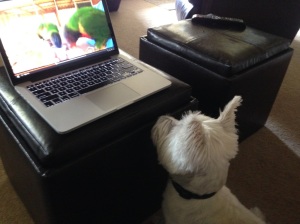 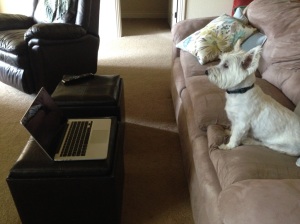 Where did it go?? 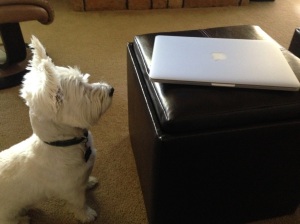 He was confuzzled when we closed the laptop. Guess he thought we trapped his doggie friends in there or something…

He eventually got settled down – though he never took his eyes off the laptop. We decided to see if his behavior was a fluke, or if that was how he responded to those videos. (And, let’s be honest – we thought it was pretty funny. I know it was mean, but… it was hilarious.) My husband found another dog-related video that quickly got Jacques’ attention. His reaction was the same – grumbling and circling the laptop and squeaks, howls, and head tilts of confusion. Eventually, Jacques laid down on the couch across from where the laptop was. We thought the fun (for us) was over and figured he was bored of it, so we turned it off. Oh no, no, no! Jacques was having none of that! He jumped off the couch and immediately hopped up to look at the laptop. He circled it a couple of times while whining and grumbling. He was obviously not happy with us ending the video. At that point, we decided we shouldn’t send him back into “super spaz” mode, so we put the laptop away. Jacques walked around looking for it for a little bit, but eventually gave up and decided to practice his gold medal sport – napping. 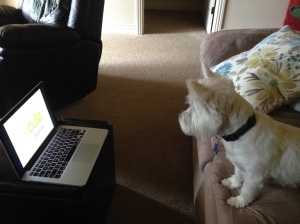 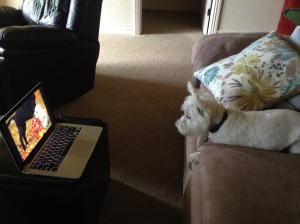 Don’t turn off my show!! 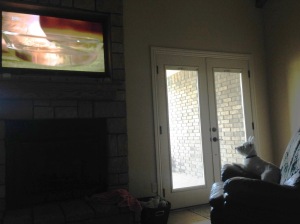 Even on the big screen, the doggie shows got (and kept) Jacques’ attention…

Now when I pull out the laptop or iPad, his ears perk up and he runs up to me to see what’s going on. In retrospect, I should have heeded the words of one “dog sitter” DVD reviewer – “If you have a high strung dog, this isn’t the video for you.” Yes, our dog is high strung. And, no, it is definitely not the DVD for him.

I have a ton of things on my phone, especially pictures. Because of all the pictures, I’m almost out of space on my phone. So in an effort to regain a little space, I started going through my pictures and deleting ones that I didn’t need or want. As I started flipping through the them, I found myself getting a little confused.

I kept seeing what I thought were the same photos over and over. I thought maybe I had somehow switched between photo albums or switched to photos on “the cloud” (and nobody really knows what that is!). I wasn’t sure, but I knew something wasn’t quite right. After closer inspection (and a lot of head scratching), I realized that they were, in fact, different photos… just of the same scene.

Jacques likes to sun himself. (We call it “charging his batteries.”) It’s one of the few Westie related things the internet didn’t lie to me about. He gets super excited and runs laps through the house – which makes me think he REALLY has to take care of business. When I open the door, he bolts outside, stops mid-stride, and falls over (think cow tipping). And apparently I think it’s incredibly funny because I have dozens of photos of it.

Maybe it’s the ridiculousness of the whole thing. Maybe it reminds me to enjoy the small things in life. Maybe it’s the sweetness in seeing a being filled with so much joy. Maybe I’m just crazy. Whatever it is, it’s like dam jokes… it never gets old.

Here is just a small sample of the photos I have… I hope they make you smile. 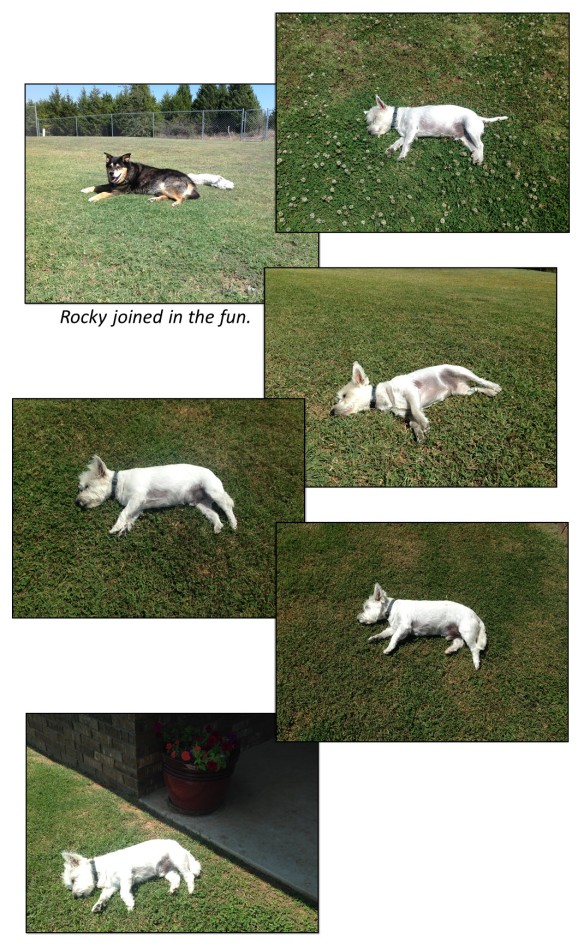 (Or… Things That Make Them Go “Whaaat?”)

Many animal owners know there are certain sounds that will wake their furry friend out of a slumber and bring them running. Most of the time these sounds are food related, but not always…

For Rocky, the sound of crinkling sliced cheese wrappers or the sound of opening a lunch meat container always drew him in. (I have no idea what that sound actually is. I never noticed it.) Even in his old man, hard of hearing days, he would haul himself into the kitchen anytime we opened some ham or sliced cheese. 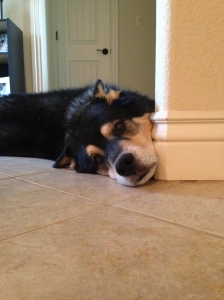 Of course, the jingle of the leash or the opening of the pantry door (TREATS!) sent them into a furry frenzy. There are a few strange sounds that draw Jacques in every time.

The first isn’t incredibly strange, but his intense reaction to it is. It doesn’t matter where he is in the house (or outside, for that matter) or how asleep he is, if he hears a squeak (even if it’s on TV!), he is immediately – and I mean immediately – on the move trying to find the source of the sound. Most of the time it’s hilarious… unless it happens in the middle of the night. Having an insane Westie on your hands at 2 a.m. is not that great. Trust me. 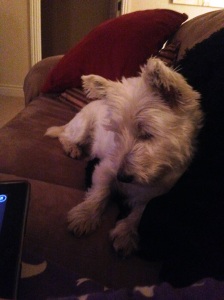 Jacques is perplexed by the squeaking noises coming from the iPad.

The other sound that attracts Jacques is, to me, very strange. It appears that he has a thing for the hair dryer. It goes something like this: I turn on the hair dryer and lean over to start drying the underside of my hair. After about 15 seconds, I stand back up… and there he is. Sitting. Staring. The first few times it happened, it scared the bejeezus out of me. Even now that I know it’s going to happen, it still startles me occasionally.

While he’s drawn to the hair dryer, he doesn’t actually like it when you turn it on him. That makes him less than happy.

I guess I shouldn’t be surprised that a strange dog is drawn in by strange and/or seemingly random sounds.

Is your pet “attracted” to strange sounds?

Or… A Day in the Life of Jacques.

Many thanks to my husband for all his help!

A Disclosure of Sorts
While we’ve had a busy six months, that hasn’t been what’s kept me from updating the blog (at least not completely). What has kept me from blogging is me. Niko and Rocky were so easy to describe… It was easy to tell a story about them. Jacques? Not so much. I have really struggled with telling his story – and not because he isn’t doing something ridiculous, insane, or hilarious all the time. I just couldn’t find the words to describe him. I couldn’t find the words to tell his story… So I got frustrated and stopped.

After a while, I realized that I was the one being ridiculous. I was the one holding me back… so with a little bit of inspiration and a whole lot of stuff to type, Jacques’ Dog Blog is back in the business of sharing crazy (Westie crazy, that is)! 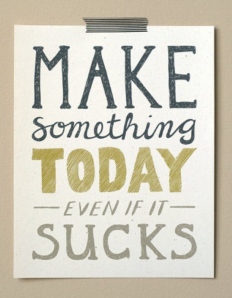 Moving On
A number of things have happened since the last blog. We’ve traveled. 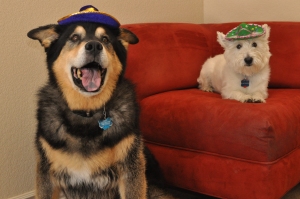 We lost our beloved Rocky. (That will be for another day…) 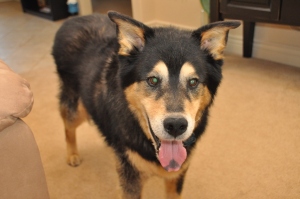 We’ve watched a bit of Shaun the Sheep. 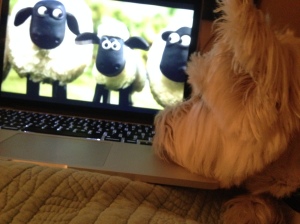 And we’ve taken a lot of naps. And I mean A. LOT. (Jacques could win a gold medal in napping.)

In the next post we’ll pick up where we left off… So sit back. Buckle up. And get ready for a ride on the crazy train that is Jacques!