A few months ago, my husband and I came home to our usual overenthusiastic greeting from Rocky and Jacques. (Okay, Jacques was the overenthusiastic part and Rocky was the greeting part of that statement.) We also came home to a strange sight. The large dog bed that normally resided in the corner of our living room was now halfway across the room. After further surveying, we realized that a couple of decorative pillows were missing. (They were later found in the office which is across the house from the living room.) Hmm.

While Rocky is known to throw himself on the dog bed and wallow around in it, he’s never moved it. And let’s be honest, Rocky’s too lazy for that. It’s just not his M.O. Jacques was the only other viable source here, but he just seemed too small to move that very large, unwieldy bed any distance.

We were curious, but decided to let it go. Until it happened again. And again. Finally, we pulled out a couple of webcams and pointed them in the direction of the large dog bed (in one corner of the living room) and in the direction of the throw pillow that seemed to always be moved to the office (on the other side of the living room). And of course we never caught anything. In fact, while the webcams were up, neither the bed nor the throw pillow were moved.

My money was still on Rocky because, while old and lazy, he had brawn (not necessarily brains) on his side. Austin thought it was Jacques. While neither of us was sure who the culprit was, we were sure we were being punk’d by a dog. Or maybe we had a ghost. We hadn’t completely ruled that out.

The “pillow fights” seemed to happen only while my husband and I were away… until one night after we had gone to bed, my husband heard a muffled noise coming from the living room. He got up to investigate and… BUSTED!!! Jacques was almost halfway across the house with the pillow from the large dog bed – he had managed to unzip it and was destuffing it! Apparently there was green stuffing EVERYWHERE. (I’m sure my husband would’ve taken a picture had it not been in the middle of the night. Okay, he probably wouldn’t have, but I would’ve taken one or insisted on one being taken had I known what was going on.)

We finally had definitive proof of who was causing the mess and destruction in our house. (The throw pillow that he kept relocating to the office has had it’s edges gnawed on so that they’re frayed and torn. Makes me a little sad because it’s one of my favorite decorative items in the living room.) And just because we finally had proof, didn’t mean that the pillow fights were going to stop anytime soon. I woke up to a little “rearranging” just this morning. 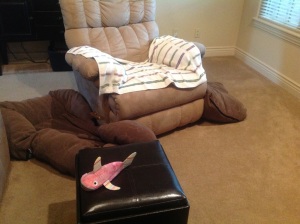 Maybe Jacques thinks he’s an interior designer and is putting things where he feels they belong. Maybe he has a vendetta against these pillows. Or maybe he’s just crazy and finds strange ways to amuse himself. Yay. Add another flavor of crazy to Jacques’ list.