I have been an avid (okay, fine… rabid) NFL fan for almost 20 years. And while I try to understand the rules and actually follow the game, I really just like to scream and yell at the TV. It makes me happy. (Except when my team is losing then it’s a very, very bad thing, but I digress.) Niko and Rocky were very young when I found my love (and subsequent hate) of football.  In an attempt to keep from scaring the hell out of them (and – I won’t lie – as a superstitious gesture), I would offer them treats for scores or really good plays. Before long, Niko and Rocky knew the difference between my hoots, hollers, screams, and yells and would either come running to reap the reward or go running to hide from the wrath. Or maybe they were running from the jerseys that I would occasionally make them wear. Whatever.

Niko eventually got to the point where he napped after our “pre-game warmup” (he knew I’d come find him to give his treat), but on game day, Rocky would always stay close by usually keeping an eye on the treats I had sitting out waiting for the next score or good defensive play. This football ritual with my boys was something I looked forward to every year. Every game day, there would be hoots and hollers and a round of pre-game high fives and good luck treats. It was just fun. It was something that I honestly enjoyed.

When Niko died, Rocky and I carried on the game day tradition as best we could, but our hearts just weren’t into it. Don’t get me wrong, Rocky would still take his treat, but he wouldn’t dance around, bark, and high five like he did before. We weren’t the team we once were.

And then came Jacques. The first football game we watched with Jacques… the poor guy. He just didn’t know what to think. I would jump up screaming and yelling like an insane person (who doesn’t love a good defensive play??!) causing him to bark incessantly and do NASCAR laps. He would stop occasionally to look at me as if to say, “Is it okay now??” Every clap, every jump up off the couch, every minor hoot from me would elicit a barking frenzy from Jacques. (Rocky, however, still only responded to the appropriate “touchdown” yell, the “interception” scream, or the “make that stupid quarterback eat dirt” holler.) I’ll admit – Jacques’ rookie season was rough, but you could tell by the end of the season that the dim little light bulb over his head was starting to go off. You could almost hear the “zzzit, zzziiit, zit” of it. My flailing and yelling would still elicit incessant barking on his part, but at least he would come to where the treats were and look at them then look expectantly at me as if he was starting to make the connection.

Jacques has a big jersey to fill. Literally.

We’re entering our second season, and I have to give the boy credit. He didn’t forget anything during the offseason. In fact, it seems as though everything he learned during his rookie season has really sunk in. He still barks like crazy, but usually only during touchdown celebrations (and that’s TOTALLY appropriate!). He hasn’t picked up on the subtle nuances of my yells, but if he’s not in the room and hears me yell at the TV, he’ll come tearing through the house to get to me then plants himself in front of me waiting for his treat. Rocky has taken to parking himself by the box of treats. In fact, last week he tried to actually eat out of the box. I looked down and his head was shoved in the box. Funny boy!

“I’ll just keep an eye on these for you…” 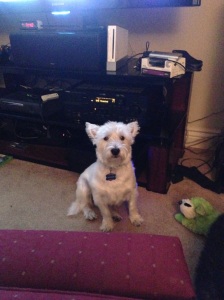 Touchdown?? Interception?? You yelled. I get a treat, no? 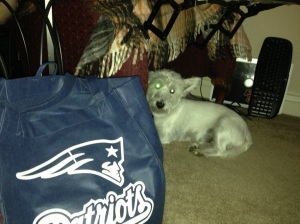 Jacques didn’t like the call on the field. Or Mommy’s reaction to it.

Game day still feels a little different. There’s still a hint of sadness to it for me because I miss Niko so much, but Jacques is definitely doing his part to be a team player. He’s even got the pre-game barking and high fiving down! With every game he’s learning the ropes and with every game I’m learning that having this new furry teammate is a wonderful thing. So, yes. Yes, we are ready for some football!! 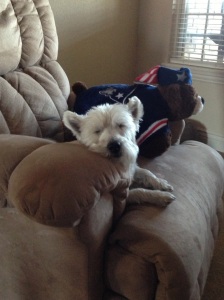 A little post-game snooze… because all that barking and treat eating is hard work!

Dog owners know that sometimes your dog can suddenly and for no reason become a picky eater. Yes, this creature that eats bugs, grass, stuffing from a toy and other random objects (not to mention its own poop!) will – at one time or another – turn its nose up at its dinner dish and walk away in some sort of canine protest. But hunger eventually gets the best of them and they swallow their pride followed by whatever is in their bowl – usually in one giant gulp.

This is true with most dogs. Luckily for me, Jacques isn’t most dogs. (In case you’re wondering, that last statement was dripping, no, oozing with sarcasm.)

Jacques gets so excited when it’s time to eat. He’ll do doggie NASCAR laps in the living room or come running in the house from outside going full speed – ears back, head down, tongue flapping in the wind – then screech around the corner to the kitchen before coming to an abrupt halt right in front of his dish. Even though he’s winded from all the excitement, he finds the strength jump and down, twirl in circles and yell non-stop until his food dish is placed in front of him. Then he falls eerily still and silent.

He looks at the dish then at you and sits down. He just sits and stares at you. He doesn’t move. I’ve come back 5 minutes later and he’s still there. Staring. In what appears to be disgust. Apparently Monsieur Jacques expected filet mignon and got the Pedigree special and was not happy about it. He eventually realizes that the filet dinner isn’t going to happen so he picks himself up, looks at the food one more time, and with a disgusted “hmph” he stomps off. He usually throws himself on some piece of furniture in a corner of the living room and grunts his disapproval on last time before falling asleep.

The next morning when I check his dish, all of the food is still there. I guess he held out hope all night that a filet would magically appear in his bowl. (It’s probably similar to how I hold out hope that a winning lottery ticket will magically appear in my hand. It’s disappointing every time.) I’ll eventually hear him sneaking bites of his food. He’s too proud to go in and chow down. No, no, no… He can’t let you know that he’s lowered himself to the Pedigree special.

Keep holding out hope, buddy. Maybe one of these days you’ll find a filet in your bowl. And I’ll find a winning lottery ticket in my hand.

Totally random picture of Rocky… because I can. 🙂