Any Oklahoman knows what springtime means – severe allergies and severe weather. On Sunday, May 19, my husband and I paid close attention to the weather forecasts and updates as we went about our day. Late in the afternoon, atmospheric conditions started coming together and before we knew it, there was a tornado watch issued for our area. (A tornado watch typically means that the “ingredients” are there for large hail, damaging winds, and tornadoes.) 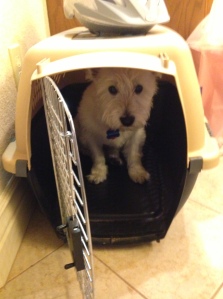 We gathered up our “most important” belongings in a central place just in case a tornado warning was issued and we had to seek shelter. (A warning basically means there is a very good, very real chance a tornado can and will form at any moment.). I was nervous, but my nervousness turned to downright fear when my husband said, “Honey, why don’t you go ahead and get changed. I don’t like the way the radar looks.” My hands trembled as I changed into jeans, a long-sleeved shirt, and sneakers. I was sweating because it was 85 degrees and humid outside, but I knew those heavy clothes would offer more protection from debris and other elements than the flowy sundress I had been wearing.

I stood poised, ready to spring into action if necessary. We were glued to the TV waiting to see what would happen. Meanwhile… Rocky was sound asleep on the cool tile in the bathroom. Jacques was barking at the thunder and pacing through the house whining because we wouldn’t let him outside to “get” the thunder.

The EF4 tornado (winds up to 200 mph) hit the small city of Shawnee and passed just north of us by 10-15 miles. It went on to ravage the rural town of Carney. Both places suffered massive structural damage. Two lives were lost in Shawnee. We went to bed that night thankful we were all safe, but thinking of the people who had been affected by the tornado that day. We had no idea what was to come the next day.

We knew there was very high probability for severe weather and tornadoes on Monday, so like always, we stayed “weather aware” (to use a hokey TV meteorologist term). My husband was at work. I work from home, so I had the TV on, only half listening until the voices on the TV started getting higher pitched and more frantic. That got my attention.

I sat, riveted to my couch as I literally watched a tornado form in front of my eyes. I watched it touch the ground in Newcastle and start to move. Because of the amazing job done by forecasters, storm chasers, and news stations, I knew – down to the block – where this tornado was and where it was going. Before long, it became apparent the path the storm was going to take. I grew up in the South Oklahoma City/Moore area. I saw the devastation first hand in 1999. I had no idea what was going to happen this time, but I knew with the unbelievable extensive coverage the television stations had, I was going to watch it unfold in front of me.

I stared in disbelief as the monster tornado plowed through houses on its path towards Moore. I fought back tears, hoping that the storm would fizzle out. But it didn’t; it only intensified. As it entered the outskirts of Moore, I could no longer fight back the tears. Tears streamed down my face as I watched it absolutely decimate an area that I had driven through thousands of times during the course of my life. I thought of the people. I thought of my family that was there… right where the tornado was. It was agonizing for me. I can’t possibly imagine what the people who were experiencing it felt. My heart literally ached for them.

When storm had finally passed, I was amazed to see people almost immediately emerge from the rubble and frantically start to search for other people. I sat in stunned silence as aerial views of the complete devastation streamed on my TV. I watched as news reporters and meteorologists tried to make sense of what had just happened.

Then I started getting texts. My nephew was missing. So was my aunt. Both of them were in schools that had taken direct hits. I looked back at the TV and saw an aerial view of what was left of the school my aunt was in and heard reporters talk about people being trapped in the rubble. They were already starting to talk about fatalities in that school. There had been another elementary school that had been completely destroyed, but to everyone’s amazement, rescuers were able to pull out children and teachers – hurt, but alive. I held out hope the same would be true for my aunt’s school.

I eventually got word that my aunt had made it out with head wounds that required staples to close. The next day we would hear that seven children did not make it out of that school despite the frantic, desperate acts of rescue workers.

After a few more tense hours, my nephew was found – safe and unharmed. His family home, located in Moore, was in an area that was left untouched by the monstrous tornado. Our family was incredibly lucky. We are so thankful that everyone is safe and at home. So many other people in Carney, Shawnee, and Moore don’t have that luxury. Their lives have been forever changed.

Jacques and Rocky have already given as much puppy power and as many milk bone kisses as they could muster. They wanted to make sure you have the information you need if you’d like to lend a helping paw. Right now, most places need monetary donations. No dollar amount is too small. Every penny helps.

These funds will help the Shawnee, Carney, and Moore victims

Text STORM to 80888 to give $10 to the Salvation Army’s Oklahoma May Tornado Relief fund (This amount will be added to your cell phone bill.)

Red Cross (You can put “Oklahoma May tornados” for the event name under step 2.)

Anyone who has read Jacques’ blog knows that he moves at his own pace (read: will only do something if he wants to and/or if it benefits him) and that we’ve been working for some time to get him to speak on command. It took us a year to get him to shake – and to his credit, he’s pretty consistent. For the past few months we’ve made a concentrated effort to work on “speak.”

Jacques is VERY food motivated. He completely understands what I mean when I say, “Are you hungry? Do you wanna bite?” He also knows what “treat” and “Do you wanna bone?” means. He goes CRAZY when you say any of those things to him. I love asking him those questions when he’s outside because he will put his ears back and head down and come running into the house at full speed. He’ll take the corner into the kitchen ‘on two wheels’ (if you will), skid out, and come to a screeching halt in front of his food dish or by the pantry, depending on if I asked if he was hungry or if he wanted a treat.

I decided to use food as a motivator to get him to speak. Before he got food or a treat, I would make him shake and would say, “Speak!” Most of the time he would shake and then give me a blank stare, but finally one day he kind of grumbled at me after I said speak. I’m sure in his head he was saying something like, “Give me the food you stupid human!!” But, in my mind it was him following my command. Kind of. Sort of. Eventually he went from grumbling to full on barking. And by “full on barking” I really mean “screaming” at me.

So now, when I call for him by asking, “Are you hungry? Do you wanna bite?” he still puts his ears back and head down as he comes running full speed towards the house… but now he barks the whole time. Non-stop. Like he won’t stop barking until I set the food in front of him – even when he skids out and crashes into the wall as he’s coming into the kitchen. The video below is actually a tame version of him at breakfast. Non-stop barking. And it’s not even really barking. It’s like doggie yelling. It’s like he’s yelling at me – borderline screaming. It’s left me asking myself, “What have I done??!!”

I definitely need to watch what I wish for! I “wished” for Jacques to speak on command. Now I have a Jacques who speaks/barks/yells incessantly at me when there’s food involved. *sigh*