Recently, my husband and I realized that cramming Rocky and Jacques (and Jacques’ car seat) in the back seat of the family truckster (a fabulous hatchback) just wasn’t going to cut it. Rocky was too big and had, unfortunately, gotten too old to ride very far squished like he was. My sometimes-too-smart-for-his-own-good enginerd husband came up with the brilliant idea of using the entire open space of the hatchback cargo area for Rocky. (Honestly, it was a good idea. I wish I would’ve thought of it!)

The back seats folded down in a 60/40 fashion, so we put Jacques’ seat on the smaller half of the seat and laid the back of the bigger seat down. This opened up the entire back of the car for Rocky to spread out and ride comfortably. I won’t mention that despite all this effort and space, Rocky still insisted on shoving his oversized head between the bucket front seats. Even with his need to ride “shotgun,” Rocky still had more space than with the previous backseat configuration… until…

We were road tripping one weekend when I heard grunting coming from the back seat. Lots of grunting. And lots of movement. When I turned around to see what all the commotion was about, I saw Jacques out of his car seat (though still tethered to it) and laying ON Rocky. Needless to say Rocky didn’t look very happy about that. I managed to get Jacques back into his car seat and thought that was the end of that. Until… a few minutes later I saw Rocky’s head pop up behind me. Apparently Jacques’” Monkey See, Monkey Do” reflex was in full force. He saw Rocky stretched out in the car, so by golly, he was going to stretch out in the car too! 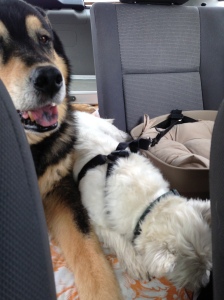 This time, I watched as Rocky plopped down – right on top of Jacques! Jacques eyes kind of bulged out. I couldn’t tell if he was frightened or being suffocated. After I was finally able to stop laughing, I tried to help Jacques move out from under Rocky, but apparently neither dog was going to budge. Jacques seemed pretty determine to stand his ground (so to speak) and Rocky didn’t really care. So, I did what any pet parent would do – I made sure Jacques was at least able to breathe and turned back around. I figured they’d get it worked out. Luckily for all involved, they worked out a sort of arrangement. Jacques would still get squished from time to time, but he eventually figured out where the “danger zone” was and tried to avoid that area. 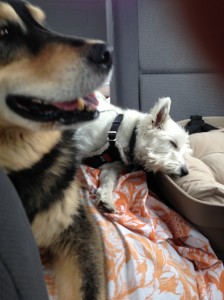 We’ve recently bought a bigger family truckster that allows Rocky to have an entire cargo area to himself (complete with personal fan!). Jacques and his car seat get the entire back bench seat. We’ve only tried it out once (with success), so we’ll have to see how it works for the long term. I’m just waiting for Jacques to decide that if Rocky gets the cargo area… then HE should get the cargo area too!

Jacques is part cat. There’s no doubt about that. (Apparently I’m channeling my inner-Dr. Seuss! HA!) I don’t know if cats have to work on their perching technique or not, but Jacques does – and he practices a lot! Jacques-ing is like perching, but it involves grunting and flailing and sometimes even falling. (Maybe the falling part is why he keeps practicing… Hmm…)

I will never forget the first time I saw Jacques, well…, Jacques-ing. It was a quiet afternoon. I was sitting on our living room couch reading. Rocky was asleep somewhere in the house. Jacques was roaming about the living room. He must have decided it was time for a snooze because I saw him head for our leather recliner. I watched as he hurled himself up into the seat and onto the overstuffed arm in one graceful motion. Then I watched as he skidded on the arm and teetered on the edge of it. Suddenly time slowed down and everything was moving in slow motion… I watched him start to fall off the arm of the chair, legs desperately trying to gain balance and hold on, head trying to turn his little pork chop body around… I blinked and returned to real time and saw him go over the edge of the chair, heard a loud “THUD!” and saw the chair rocking back and forth. The chair blocked my view of his landing, but the sound let me know that he had, in fact, landed. It was like a Wylie E. Coyote moment… you know, where he goes over the cliff and is suspended in air until gravity mercilessly kicks in then all you see is the dust cloud? Yeah, that was pretty much what happened.

I’m not going to lie – I burst out laughing. Hysterically. I got up and checked on him. He was fine. I think his ego was a little bruised, but that was about it. He didn’t give me the “What? I meant to do that” look that Rocky is known for. Instead he gave me more of a “What the…??” look before sulking off to lay in the corner. But, he is not one to give up. He tried it again later, this time with a little less oomph as he jumped up into the recliner.

A few weeks later, he tried Jacques-ing on the arm of the couch. HAHA! That dog…  He jumped up, and I guess the throw pillows were in his way (or he’s just “special”) because he started to fall off the arm. His eyes got huge and his legs started flailing. Luckily for him (and for us) the couch is microfiber so he was able to get a little traction going to help stop his fall. (This fall would’ve hurt because he would’ve landed on our coffee table.) I watched him catch his breath then curl up on the arm of the couch and proceed to take a nap.

Okay, last Jacques-ing story. For now anyway. I was in the office last week when I heard the strangest sound behind me. There was grunting and strange scratching – lots of it. I turned around and saw Jacques scrambling up the pillowed back of the chair – grunting, little feet pushing, pork chop body bouncing with every push. He finally made it to the top, looked at me, and immediately plopped down and started snoring. I guess climbing Mt. Office Chair was quite challenging for the little guy! 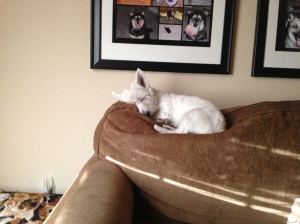 I hope Jacques keeps “practicing” his Jacques-ing technique because I find it incredibly entertaining. You never know when or where he’s going to be Jacques-ing next!